The design of a transcritical CO2 system is a challenge even for a refrigeration expert. The correct implementation and quality of the equipment depends not only on the efficiency, but also on the safety and profitability of the production plant. When evaluating the feasibility of this system in a refrigeration project, it’s convenient to consider these 4 points.

It isn’t only because of the concern about natural gases and their role in caring for the environment. The physicochemical properties of Carbon Dioxide make it an excellent compound for heat transport, so its use becomes a win-win. It gains efficiency in refrigeration, and the planet wins in its conservation.


1. Temperature and critical point of CO2

Before working with this gas, it’s important to know its characteristics:

The cooling systems that base their operation on this compound operate in different ways as they do above or below the critical point, which is no more than the point where the liquid-vapor phase change is maintained in equilibrium.

In the use of CO2 as a refrigerant gas, we can locate two applications: subcritical and transcritical:


3. The pressure in transcritical CO2 systems

Transcritical systems, like subcritical systems, evaporate CO2 below its critical point. However, in these systems, the pressure discharge of the compressor is very high (above 1069 psia / 73.7 Bar) and above the critical point, where CO2 exists without a clear distinction between the liquid and gaseous state. This results in the "transformation" of CO2 into a nebulous vapor species, more dense than the gaseous state.

Consequently, the superheated fluid must be constantly cooled in a gas cooler, instead of cooling and condensing it to liquid, as in a subcritical cycle. The compressed and cooled fluid receives a reduction in pressure below the critical point where a part of the fluid condenses into liquid to be fed into the evaporator.

4. Cycle: from transcritical to subcritical

If the heat sink of the gas is sufficiently cold, the cycle could transient to subcritical and then, the condensation of a certain part of the fluid to liquid could happen in the gas cooler. This doesn’t cause any operational problems if the pressure regulating valve at the outlet of the cooler is properly controlled.

The following figure shows a basic transcritical system plotted in a PH diagram (pressure-enthalpy). Some parts of the process cycle occur above the critical point and other parts below the critical pressure.

5. Transcritical cycle and heat exchange with the exterior

You can also do a CO2 cycle that exchanges heat with the outside. In this case it’s a transcritical cycle, as in certain periods of the year where the outside temperature is near or around 31.1 ° C.

The following figure shows a simplified, single-stage stage for a transcritical cooling circuit superimposed on a pressure-enthalpy diagram. The heat of the gas cooler is rejected to a heat sink at a higher temperature than the critical temperature. 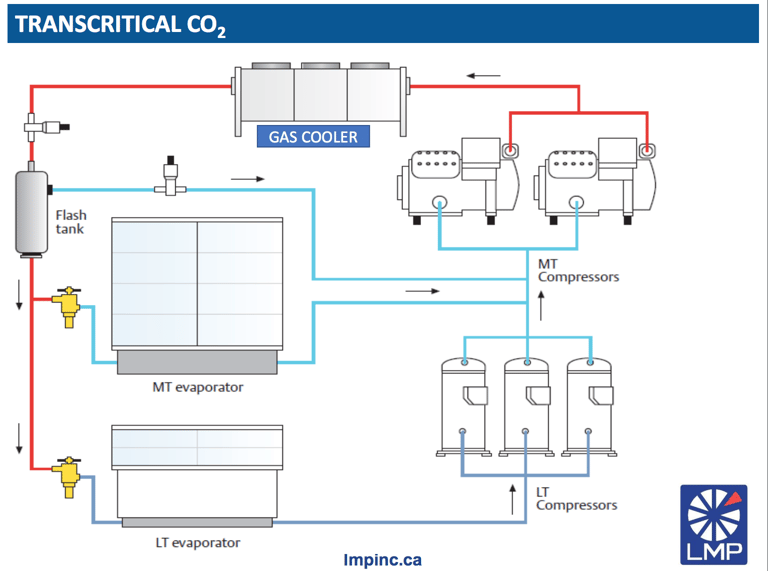 Considerations: design of the working pressure by the ASHRAE

Currently, as of January 201 4, ASHRAE Standard 15 requires a DWP (Work Pressure Design by its acronym in English) of 20% higher than the maximum pressure developed by the pressure of the element imposed. However, there is a proposal, change in Standard 15 of ASHRAE to lower the margin from 20% to 10% in the critical parts of the system.

To continue in force in the refrigeration industry requires training in the implementation of natural gases as refrigerants in very diverse conditions, both climatic and production. Year after year, the landscape changes and new technologies are integrated, equipment is optimized and different solutions are designed.